The Autonomous Vehicle Workshop is a two-day colloquium, June 15 and June 16, to present the latest in Canada's cutting edge autonomous vehicle technology. Top researchers from UofT's Robotics Institute will present their work in collaboration with industry partners. Come and network with Toronto's growing AV ecosystem.

Raquel Urtasun is a Professor in the Department of Computer Science at the University of Toronto, a Canada Research Chair in Machine Learning and Computer Vision and a co-founder of the Vector Institute for AI. Prior to this she was the Chief Scientist of Uber ATG and the Head of Uber ATG R&D. Before that, she was an Assistant Professor at the Toyota Technological Institute at Chicago (TTIC), an academic computer science institute affiliated with the University of Chicago. Additionally she was a visiting professor at ETH Zurich during the spring semester of 2010. She received her Ph.D. degree from the Computer Science department at Ecole Polytechnique Federal de Lausanne (EPFL) in 2006 and did her postdoc at MIT and UC Berkeley. She is a world leading expert in AI for self-driving cars. Her research interests include machine learning, computer vision, robotics and remote sensing. Her lab was selected as an NVIDIA NVAIL lab. She is a recipient of an NSERC EWR Steacie Award, an NVIDIA Pioneers of AI Award, a Ministry of Education and Innovation Early Researcher Award, three Google Faculty Research Awards, an Amazon Faculty Research Award, a Connaught New Researcher Award, a Fallona Family Research Award, an UPNA alumni award and two Best Paper Runner up Prize awarded at the Conference on Computer Vision and Pattern Recognition (CVPR) in 2013 and 2017 respectively. She was also named Chatelaine 2018 Woman of the year, and 2018 Toronto's top influencers by Adweek magazine.

Igor Gilitschenski is an incoming Assistant Professor in Computer Science at the University of Toronto (starting in August 2021). Currently, he is a visiting Research Scientist with the Toyota Research Institute. His work received several awards such as a RA-L Best Paper Award in 2020. He has been affiliated with MIT’s Computer Science and Artificial Intelligence Lab and the Autonomous Systems Lab of ETH Zurich. Gilitschenski obtained his PhD degree in computer science working on nonlinear estimation at the Intelligent Sensor-Actuator-Systems Lab of the Karlsruhe Institute of Technology (KIT). He did his undergraduate work at the University of Stuttgart. His research aims to enable robust interactive autonomy by developing novel perception and decision-making methods for challenging dynamic environments.

Florian Shkurti is an Assistant Professor in the Department of Computer Science, University of Toronto, cross-appointed in engineering at UTIAS. He is a faculty member at the Robotics Institute and faculty affiliate at the Vector Institute. Shkurti was a member of the McGill Mobile Robotics Lab and the NSERC Canadian Field Robotics Network. He directs the Robot Vision and Learning (RVL) lab at the University of Toronto. His research spans mobile robotics, computer vision, machine learning, planning and control. He is the recipient of the Alexander Graham Bell Doctoral Award, the AAAI Robotics Fellowship, the Coxeter Scholarship in Mathematics, and the Amazon Research Award in Robotics.

aUToronto - Level 4 Self-Driving by Students in 4 YearsWe are aUToronto, a team of more than 70 ambitious students from a diverse educational background. Our goal is to prototype a self-driving car capable of navigating urban driving environments as part of the University of Toronto’s initiative in the GM/SAE AutoDrive Competition. By leveraging state-of-the-art technology and partnering with research and industry leaders, we are creating a vehicle that will provide a safer, swifter, and smarter driving experience. In this presentation, our students will review our vehicle’s autonomy system, and share stories and lessons learned along the journey. 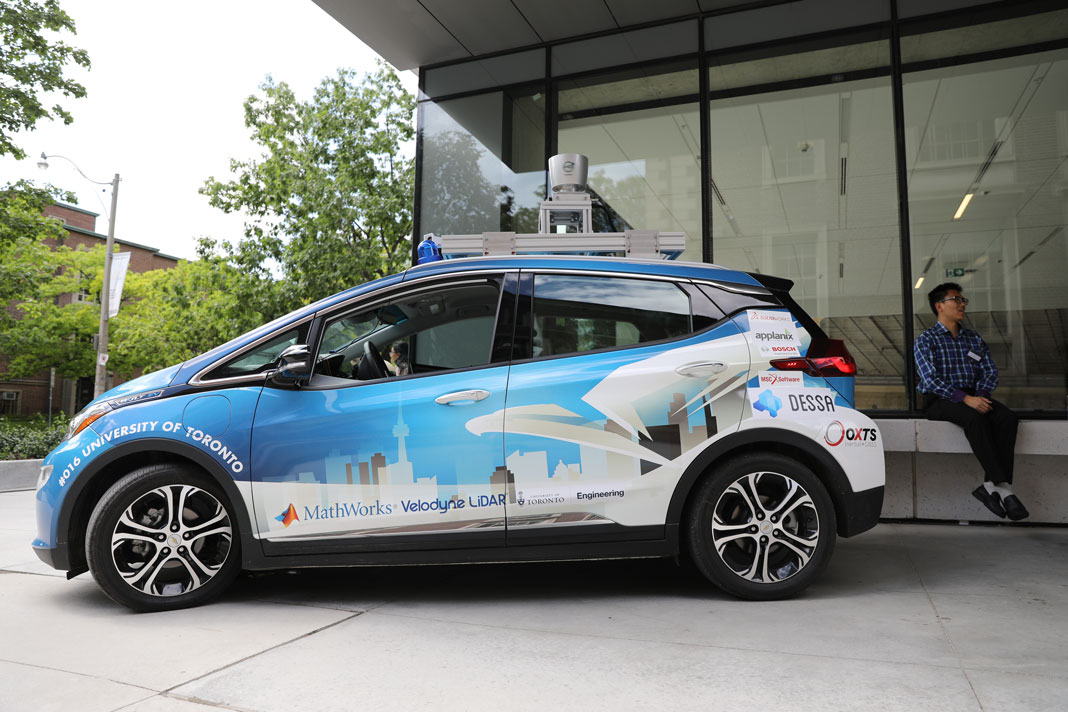 Drago joined Waymo in 2018 to lead the Research team, which focuses on developing the state of the art in autonomous driving using machine learning. Drago spent eight years at Google; first working on 3D vision and pose estimation for StreetView, and later leading a research team which developed computer vision systems for annotating Google Photos. The team also invented popular methods such as the Inception neural network architecture, and the SSD detector, which helped win the Imagenet 2014 Classification and Detection challenges. Before Waymo, Drago led the 3D Perception team at Zoox.

Tim Barfoot is a Professor and the Principle Investigator of the Autonomous Space Robotics Lab (ASRL) at UTIAS. He began his position in May 2007, after spending four years at MDA Space Missions, where he developed autonomous-vehicle navigation technologies for both space and terrestrial applications. Prof. Barfoot is an IEEE Fellow, an Ontario Early Researcher Award holder, and a Professional Engineer (Ontario), and held a Canada Research Chair (Tier II) in Autonomous Space Robotics. He received his B.A.Sc. and Ph.D. from the University of Toronto. Barfoot’s research program is to enable scientific exploration by creating advanced autonomy for space robotics.

Steven Waslander is an Associate Professor at UTIAS and Director of TRAIL (Toronto Robotics and AI Laboratory). ​Waslander’s innovations were recognized by the Ontario Centres of Excellence Mind to Market award for the best Industry/Academia collaboration (2012, with Aeryon Labs), best paper and best poster awards at the Computer and Robot Vision Conference (2018), and through two Outstanding Performance Awards, and two Distinguished Performance Awards while at the University of Waterloo.  His work on autonomous vehicles has resulted in the Autonomoose, the first autonomous vehicle created at a Canadian University to drive on public roads. His insights into autonomous driving have been featured in the Globe and Mail, Toronto Star, National Post, the Rick Mercer Report, and on national CBC Radio. Waslander is a leading authority on autonomous aerial and ground vehicles, including multirotor drones and autonomous driving vehicles, Simultaneous Localization and Mapping (SLAM) and multi-vehicle systems.

Jonathan Kelly is currently Dean’s Catalyst Professor at UTIAS. He holds a tier-two Canada Research Chair in Collaborative Robotics. Kelly has won a Connaught New Researcher Award and was a Science Leadership Program Fellow. He received his Ph.D. from the University of Southern California, where he was an Annenberg Fellow and was supported in part by a PGS-D award from NSERC Canada. Before moving to UTIAS, he held a postdoctoral appointment in the Robust Robotics Group at the Massachusetts Institute of Technology. Prior to graduate school, he was a Software Engineer in the Space Technologies division of the Canadian Space Agency. Kelly’s research is focussed on developing robust autonomous systems that are able to operate independently over long durations in challenging environments, for example, in space and on remote planetary surfaces.